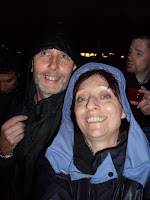 Where to begin... maybe perhaps with the news that we had a lovely anniversary/birthday weekend. Thirty years of marriage deserved celebrating in style so we did. A four (or was it five?) star hotel next to Hyde Park and tickets for the Hard Rock Calling festival.
The weather was kind to us - in a weird and wonderful sort of way. Friday night saw the most enormous sustained downpour but we were well prepared with wellies and waterproofs and guess a lot of people must have stayed away as we could get to the front and lean on the barrier. We saw The Killers supported by the Kaiser Chiefs and it's difficult to find the words to describe how awesome they were - especially when the confetti cannons and fireworks kicked off during "All these things..."
Saturday the sun shone and the temperature rocketed. We braved the sales at Harrods and Harvey Nicks before hanging out in the park with a picnic waiting for the guilty pleasure that is Bon Jovi. They rocked the place for three hours ending with "I Love This Town". Don't we all...?!
I'm sure some people reading this will be thinking this was utter madness, and asking how did my back cope with it all? The simple answer is we bought the tickets last year (originally I had hoped to go to South America for our anniversary), and nothing was going to stop us getting to this! I leant on barriers, or on Ian, dosed myself up on painkillers (and wine) and tried not to let the pain get in the way.
Sure I was gutted not to be in the midst of the crowd throwing myself around like a mad thing the way I used to. But I had to keep reminding myself it was a miracle I was there at all!
We managed a few other treats too - late night red wine and chips watching Glasto on TV; room service breakfast one day and a greasy spoon the next; ices in the park, home in time for a bottle of wine on the decking and surprise visits from all the children. Things could be a whole lot worse! 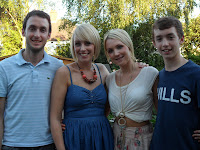