Cut to the Chase

The last post finished with a picture. Hands up if you recognised it?

Well done - Job Centre Plus (what's the plus all about - plus security? minus toilet facilities?), Exchange Road, Watford.

If this blog is to continue I somehow have to exorcise the ghost of the Job Centre. I also need to tell it how it is for anyone of you fortunate enough never to have graced one with your presence. Apart from all that however this could - perhaps - be a vaguely amusing post if we can set aside just how horrific the whole system is...

When my contract ended I was busy applying for other jobs. In fact I remember feeling vaguely uncomfortable that I was going for second interviews even before I knew for certain that my existing contract would not be renewed. Colleagues and friends assured me there was no question I would not find another job quickly and easily. If that was you then bless you and thank you for your encouragement.

I applied for lots of jobs and initially thought it would be easy - exciting even - to find a new post. I am embarrassed to admit it but until this point I had not attended a job interview and not been appointed, Ouch. Reality check.

I went for interviews and was not appointed. Worse than this however was spending hours on application forms not to receive an acknowledgement or be invited for interview. I am not sure exactly when I signed on but I was encouraged to do so by friends who told me "the government needs to know". Exactly what they needed to know I was unsure - but that one more person is unemployed would do for starters.

The Job Centre is a bus ride away. The first time I ventured there I missed the bus stop. When I asked the driver and he realised where I was headed I cried. The first of many Job Centre related tears.

To be fair they were nice to me. The security guards smiled, the managers often came forward to escort me to my advisor. The people behind the desks were reasonably helpful - though some eye contact rather than frantic online form filling would have been nice. Telling me to dumb down my CV was perhaps not one of their best suggestions - though I have heard it's not uncommon. To be fair I did find the advisor's anger - make that fury - when I found 16 hours work one week somewhat bewildering. 15 hours and 59 minutes would have been fine but 16 meant I was booted out of the system and had to start over, and it was too late to change the form as he had seen it. Poor him.

Poor me too though. I did cry and still wonder why that was? Perhaps because in spite of the smiles and help I received most claimants were treated as almost a different species? And I felt tarred with the same brush even if I did look different. There - I have said it. I was still dressed as I would have been for the office. No visible tattoos, shaved head, piercings.

And what was this different treatment? For starters the presence of security, the sense that we were out to cause trouble, that we were not deserving of basic human provision. Coffee machine - no way! Water cooler - you must be joking! On one occasion I asked to use the toilet - needing tissues and to pull myself together. But there are no toilets - for use by claimants - at the Job Centre Plus.

Why did I come off of JSA? Last summer I did three things that made me ineligible. I covered for someone on holiday in a local office - a whole weeks work! I then went on holiday for a week with the family. Nothing fancy - but obviously unavailable for work. And finally I volunteered as a London Ambassador during the Olympics.

That was it for me. Call me a coward but I had enough. From now on I was on my own. 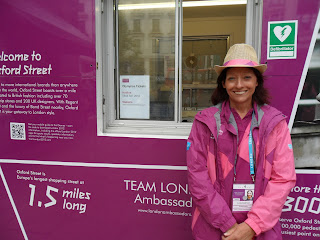