Why pick up the virtual pen again after all this time?

I am inspired to do so by an ex colleague who has herself entered the blogosphere of late. She writes with wit and warmth about the tribulations of a particular version of motherhood. Saying it how it is, she never stumbles into self pity or engenders unwanted sympathy. I follow her adventures with interest and amusement and admire her honesty and tenacity.

This blog "used to be" about my scoliosis journey. It still is - but I imagine the next chapters will differ somewhat from those morphine soaked entries three years ago. Each and every day I hear a blog post running through my mind and have decided to commit them to what used to be called paper on a more regular basis again - but why and what's stopped me before now?

Exactly the things I have NOT found in my ex colleague's blog if I am honest - the fear of appearing self pitying or of engendering unwanted sympathy. I do intend to write a pretty no holds barred account of life after surgery and redundancy so if you are squeamish, sensitive or easily offended perhaps it is time to look away now.

I will begin later on - there is a house to clean, beds to change, laundry to be sorted and baking to be done before then. But this is a start.

Finally - for anyone confused about my blog - there is of course another one, live and kicking, over at www.filledwithlovecupcakes.org There you can find all sorts of cake filled happiness and what has affectionately been called food p*rn. (I starred the o there as I really do not want to attract the wrong sort of reader here...)

Every blog needs a photo but an introduction such as this struggles so just for now here is an emergency cat - she does love a nice cup of cold tea! 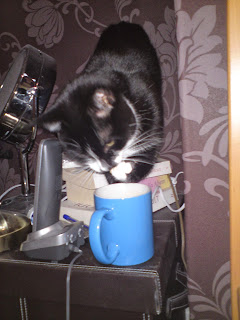