A bit of an aside 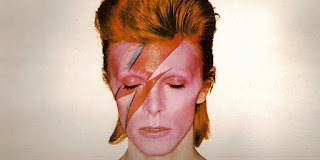 Woken to some very sad news, that David Bowie has died.

At the height of his fame I wasn't his most massive fan. My teenage years were somewhat dominated by my infatuation with David Cassidy if I'm honest. As my musical tastes matured I bought albums from Bruce Springsteen, listened to T Rex and Queen, went to Genesis gigs and somehow Bowie didn't feature highly on my playlists. (I use the term loosely of course - playlists at the time often consisted of cassette tapes with fuzzy bootlegged versions of songs recorded off the radio but that's another story)

You could say that I slowly came to an appreciation of his music. On hearing of his death I looked again at some of his musical legacy and its honestly quite breathtaking. I'm looking forward to listening later to many of his classic tracks as I am sure the radio will be full of them.

Why then did I feel the need to write about the passing of someone I knew of but didn't know? Whose life was a million miles removed from my own and who didn't know I existed?

I don't have the answer to my own questions. Other than a sense that we never quite know how our life may impact others. I don't suppose for one minute that David Bowie ever considered a 56 year old woman in South West Hertfordshire would wake up and write this on hearing of his death, especially when she only ever bought one of his albums.

But his creative genius, softly spoken words, undeniable good looks and distinctive voice were there as I grew up and now I wish I had paid a little more attention. I'm also inspired to live my life a little bit differently, in the knowledge that we really never fully appreciate the impact we are having on others.