And so it begins

Each of the characters receives an unexpected invitation to attend a gathering on Soldier Island. Without wishing to spoil the plot for anyone unfamiliar with the story they then die - one by one - until there are none.

Receiving an invitation to Missenden Abbey wasn't quite as unexpected - or maybe it was. When the suggestion was first made that I attend I knew nothing of the Link4Growth conference. Had I seen it advertised I may have been vaguely interested - we host two L4G meetings a month in The Kitchen. But taking a day or two out of a hectic schedule to sit and listen to speakers - was that really good use of my time?

No one really thought that I would come to an untimely end in Great Missenden. But there was a degree of curiosity and scepticism amongst friends and colleagues. Aside from the jokes about murder mysteries there was some concern as to what this was all about. Was Link4Growth some kind of a cult? What's in it for us - or more importantly for the leaders? Surely it's all a bit too good to be true - a free awayday - including lunch. After all - we all know there's no such thing as a free lunch!

One thing made it all much easier - the request to bake a cake for the conference. Initially this was to be a sponge cake with the L4G logo on the top. But as my curiosity about the day grew, as I read and discovered more, I wanted to do justice to what I felt was going to be a special day. The cake therefore grew to four layers - baked in the L4G colours - and covered with white fondant it provided a perfect canvas on which to somehow depict what I was learning.

The fabulous artwork from Sophie Honeybelle was my inspiration. Some artistic licence was necessary as I was working with fondant but I felt that somehow the cake captured the L4G journey and illustrated the various aspects such as Link4Business and L4G.TV

Arriving at the conference I was thrilled to see it on display. And if I am allowed for one moment to take pride in my work it was fun to have people say things to me such as "isn't that cake amazing!" and "what a talent - don't you wish you could do that?!" I replied "Thank you" and enjoyed their reaction! 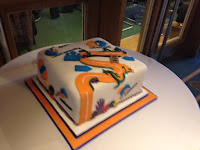 And so - the invitation accepted, the cake baked, and the days off negotiated I found myself sat in the front row of a conference about which I wasn't sure how much I knew. If that sounds confused then perhaps that's because I was.

Working as I did at Christian Aid for many years I lost count of how many conferences I organised. I would be familiar with the attendees, the programme, the workshops, presentations and after hours plans for socialising.

Within various other Christian organisations I was familiar with conference schedules. They would open with notices and fire safety announcements. There would be a time of worship - usually singing a few songs and someone leading us in a prayer. This would be followed by speakers, break out groups, workshops and discussions. Interesting as it was I often found myself looking forward to a break for coffee, lunch or something that meant I could stretch my legs - and brain - by talking to other delegates.

Ironically perhaps it was often the after hours socialising that I found most useful - chatting to colleagues over a drink or two, getting to know people properly and setting aside the day's agenda to share what we really felt.

This was probably what I expected from the Link4Growth conference. If indeed I expected anything at all. After all I had found myself at an event about which I knew very little and which I hadn't exactly chosen to come to. What would the day turn out to be like...?