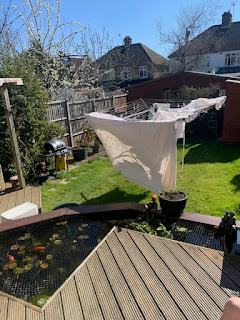 Yesterday's post ended rather abruptly. It was one of those that I kept meaning to go back to but somehow never did.

Someone had actually posted on one of the several WhatsApp groups that I belong to that there almost seems to be less time in the day to get things done at the moment. Technology is a wonderful thing - even if to be honest it stresses me out big time - and it does seem to have promoted a plethora (ooh - loving that alliteration!) of get togethers and gatherings that previously may have remained " a good idea".

So yesterday saw us watching The Virtual Grand National on TV whilst on another device the family gathered for the live draw of the family sweepstake. The winnings will be transferred electronically to the virtual victor! The TV channels are also pushing out huge amounts of content to keep us entertained in our own homes so we watched One Man Two Guvnors from the National Theatre along with the first ever Gavin and Stacey and an early episode of Outnumbered. This and Miranda have been classic comedy which is probably what we all need right now. The Platform on Netflix may be relevant to these dystopian times but I'd rather chuckle between Billericay and Barry Island at the moment.

Today the sun is shining and we are blessed with a garden so it's time to get out there. One of my neighbours is a matron in the ICU at Northwick Park Hospital and chatting to her this morning I am acutely aware of the nightmare unfolding in our hospitals. These are frightening times for us all but whilst so much of what is happening feels out of our control the one thing that we can do to try and stay safe is to stay at home. Of course it is boring for some, others are going stir crazy. If you are living in a small flat with no outside space, perhaps in a high rise apartment, it must be almost impossible. Especially with young children, or teenagers.

But at this time of national emergency there really is no other way. There are some folk out there flouting the rules, making out this is no big deal, spouting conspiracy theories and doing all they can to doubt and disprove the official advice. The news is full of people gathering for barbecues and parties, sunbathing in the parks and using the outside gyms and parks which are CLOSED. Sadly our beaches are now out of bounds as so many people abused the right to take some exercise by gathering together.

It's a really difficult time. Someone I know just "attended" his first Zoom funeral. Weddings are being postponed, we should have been at a 50th party last night. As a business we have lost hundreds of pounds, refunding deposits for celebrations and cakes that will not now take place, or if they do so will be on a much smaller scale.

We have no idea when - or even if - we will be able to reopen The Kitchen. It occurred to me very briefly this morning that perhaps it is time to rethink how we operate. Stop trying to make it work as a profitable business and instead run it as a social enterprise, as a community coffee shop staffed with a mix of paid and volunteer workers, all for the common good. It's just a thought.

For now though time to grab a good book and get out into that sunshine!
Posted by Linda at 13:29