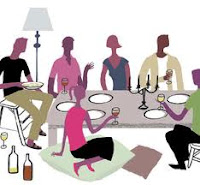 Saturday night and yet again we've been enticed into ITV's televisual offering. Under the guise of the X Factor a parade of hopefuls have appeared on stage and screen, hoping for their fifteen minutes - or perhaps their lifetime - of fame.
I do find it entertaining - no question about that. Sure the music doesn't showcase new songwriters but I quite enjoy the covers. Every now and again a song will bring out those goosebumps and you realise just how gifted someone is.
What I don't like is the way in which some make it to perform in front of the judges even though they are clearly not gifted or talented. Not sure how many people know this but there are several rounds of auditions before you actually get to appear in front of Gary, Kelly, Louis and Tulisa. I know as I met someone who made it to Bootcamp.
So why do the people behind the scenes allow someone who clearly does not have the X or even the Y Factor on that stage? Well obviously - for entertainment purposes.
The cruelty involved here really does bother me. Anyone making it to this stage surely must believe they are in with a chance, and some are. But others are simply here to be held up to public ridicule - with family and friends waiting in the wings oblivious to the humiliation hovering alongside them.
Sure it's manufactured music - look at last year as a classic example. Five lovely lads were rejected, reformed into a band, came third in the competition and tomorrow they will be number one in the charts with the fastest selling single of this year. Who am I to say they don't have the x factor - but I can't help challenging the process!
All of which brings me back to what I had planned to write about originally!
The last couple of posts have, by my own admission, been a tad heavier than I ever expected or planned them to be. The tax campaign and situation in the middle east don't make for easy reading - I know that. So I'm thinking back to a comment from a dear friend a few posts back - suggesting I blog about my perfect dinner party. Six guests - who would they be and what would we talk about? I guess what we eat might be of interest too?!
Not much time tonight to fill in all the details so I'm going to start at the beginning - put together a guest list and maybe over the next few days and weeks I'll fill in the menu and the conversation.
So - who to invite? I'm assuming guests can be here on earth or passed away so at the top of the table I'd simply have to have Martin Luther King. All this stuff about his life and loves the past week - how does that make him feel? How can it possibly take away from his amazing achievements and how does he feel about the possibility that it might?
On his right it has to be a lady - keeping the male/female dinner party protocol going! So how about Beyonce? Since I saw her live a few weeks back I have been in awe of her beauty, her talent and her graciousness. Something tells me she has more to offer and since the demise of Michael Jackson is there another global superstar of her calibre? I doubt it.
Moving round the table we need another guy and of course it has to be Gary. Mr Barlow is becoming something of a national treasure - following his success with Take That and more recently the X factor (see above...) he used to be the chubby one but his newly chiselled cheekbones are taking the nation by storm - look out for more about him in the coming days.
Another lady - and moving away from the world of music to that of film it has to be Meryl Streep. I waivered for a millisecond there as there are some English Dames that I did consider. But "The winner takes it all" won it for Meryl - and so much to ask about life and love and Mr Bond before Daniel Craig ;-)
He of course was a candidate for the third male seat - I make no secret of my admiration for his fine acting abilities (not to mention that body as he emerges from the surf in Casino Royale...). I hope he will forgive me but I feel the need to diversify the guest list and bring in someone who will add a different dimension to the conversation. I've spent a fair bit of time thinking about this one but all things considered I reckon I will go with Usain Bolt. Don't suppose any of you saw that coming and in looking to the world of sport I was of course drawn to David Beckham (obviously for his views on family life), to Jonathon Edwards to discuss things from a faith perspective, and Gary Lineker in the hope of some cheese and onion freebies. But Usain Bolt's battle with scoliosis and achievements in spite of it inspire me and I'd love to talk to him.
So who joins Martin Luther King, Gary Barlow, Usain Bolt, Beyonce and Meryl Streep for dinner? Another female naturally and I am going to opt for Aung San Suu Kyi. I don't pretend to begin to understand what her life must have been like, but I want to know more.
I'm actually quite excited at the thought of this gathering - thanks to Fang Fang for suggesting I put my mind to it. I'm looking forward to imagining what we might talk about so watch this space!
xx
.
Posted by Linda at 21:31