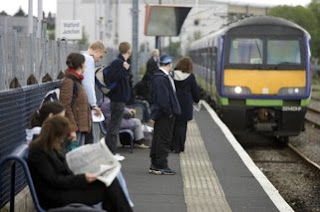 Today was definitely a "write" day with several stories to file from yesterday and a full day in the office to look forward to. Ian is still on annual leave and offered a lift to Bricketwood so all good - so far.

After a long but productive day I was looking forward to a drinks reception just off Carnaby Street. An opportunity to catch up with friends and colleagues from a former life, surrounded by gardening items donated by celebrities and now being auctioned on ebay. Free wine and nibbles no less - and meeting up with Ian for a bit of quality time together.

On leaving the office and preparing for the mini trek to Bricketwood station I was thrilled to be offered a lift by one of my new colleagues. Within minutes I was stood on the platform waiting for the fast train to Euston where I would pick up the tube to Oxford Circus.

How, how, how had I managed to forget the events of two weeks ago? The whole Abbey flyer fiasco? Why had it not occurred to me to check train times, never mind whether there was a ticket office? What was I now doing standing on a station platform with a display sign telling me the next train was due in 50 minutes time.

And how had I forgotten that this station was on a branch line and not as I had anticipated the main line to Euston? That of course would get me as far as Watford where allowing for the sprint from Platform 11 and possible wait for the mainline train, followed by the hop on the Bakerloo Line, meant I would probably make it to the drinks reception around twenty minutes after it finished.

Never one to be defeated easily I struck up conversation with a young mum on the platform who, as it turned out, had a phone with the number of a local taxi firm saved, and an extensive knowledge of transport networks in London and the surrounding areas. She called them up but sadly the cost of a cab to Watford Junction was almost equivalent to the penalty fare on the Abbey Flyer. A Plan B was called for.

That involved me asking if there was any other railway station in the vicinity and another phone call later finding myself in a taxi to Radlett. From where I caught a First Capital Connect train to West Hampstead Thameslink. A short walk to the Jubilee Line, fifteen minutes to Bond Street, a ten minute walk and I was in the pop up shop with my husband and a glass of red. Twenty five minutes late and around twenty pounds poorer. Isn't it good to be green...?
Posted by Linda at 23:58