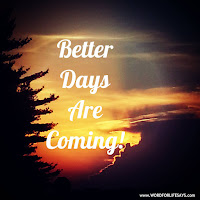 In the midst of the madness that is a global pandemic there will inevitably be good days and bad days. Won't there? How do we in fact know that to be the case? Has anyone any actual record of how people felt back in 1918 as Spanish Flu ravaged the planet?

Perhaps this assumption is actually untrue, and for some people every day that this goes on will be a struggle, unable to see the light at the end of what may be a long tunnel. As Revered Kate Bottley said on twitter only yesterday "It's ok not to be trying to be cheerful, it's okay to lament and be angry and sad and to rage. You don't have to "make the best of it" every minute of every day of this thing. You have a bloody good cry if you need to, ok?"

Maybe that will be for many the pattern of these dormant days. For others with a natural resilience or the ability to create a routine that somehow sustains their mental health things may not in fact be so bleak. I have heard of some people enjoying the break from the routine or even the stress of work. Relaxing in the sunshine, cooking from scratch, and in some cases even on full pay.

Speaking personally for a moment my hope is that I will manage to maintain some positivity in the midst of all this. One of the reasons for keeping this diary is to document not only what is happening but how I feel about it. In years to come I hope it will be an interesting historical document, and in the present day I definitely find it therapeutic, as I have said so many times, to dump how I am feeling here and try to somehow walk away.

And so to today, which has been better than yesterday. Yesterday of course having been just the worst. Today I somehow let go of the worries regarding The Kitchen. I have absolutely no idea at all if or when we will ever manage to re-open. Perhaps that sounds negative, but it is also true. Hanging on to a relentless positivity  may feel like the right thing to be doing but there is also a reality to be faced and perhaps owning that is the right thing to do at the moment.

Today I have also tackled some of the more demanding emails which have all week been screaming at me. If truth be told it's been an enormous effort to even open the laptop at times but dealing with them, especially if they involve tackling difficult subjects, has been a good thing (even if awaiting some of the replies feels less good just now).

I have also succumbed to a bit of comfort TV - something about Diana is playing on Netflix as I type this. And Cobra has been purchased for this evening. Dinner is planned with little cooking to be done and after that an early night. The press conference was early today - I think someone mentioned it is the weekend? Led by the Business Secretary it focussed on that impact of this crisis but underneath all of that there was the tragic news that over 1000 people have now died as a result of Covid 19.

When will this end? It's so hard to even imagine such a time, when we can visit and hug friends and family, once again drink in the pub and celebrate birthdays, anniversaries, weddings! There will be plenty of parties to enjoy then for sure,  But until then one day at a time and hopefully as many of them as possible will be Better Days.
Posted by Linda at 23:07