Wow! Look at these amazing images! 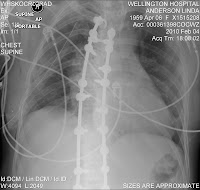 It's been a challenge - but at least something of a distraction! The original x rays and scans of my spine arrived in the post this morning. In some weird and wonderful format but I've managed to convert them to jpeg files ( feeling a bit smug and proud of myself) so I can share them with the world.
Above left is actually a slice from the MRI scan and for anyone in any doubt I think it shows the extent of the curvature - 66 degrees and deteriorating rapidly. Above right was on a previous blog post but worth repeating here I think. According to the disc it was taken in theatre and shows what I now know to be the 14 two inch screws along with the titanium rods and various hooks. The observant amongst you will also see the chest drain which gave me so much grief :-)

These side views are perhaps less impressive - though if you look carefully I think you can see the lordosis reduced. I am hoping that means my tummy will stick out less, coupled with the weight loss and height increase look out Elle Macpherson :-)
Joking apart - I am trying to work out just what a difference the surgery has made to my BMI. One huge surprise has been to realise that for years I had maintained I was five foot 4 and a half - or even five foot five - tall. Looking at the various reports and records here I see I had shrunk to five foot three and a half! Hence my disappointment when measured post op and was just five foot five and a half (and rounding that up slightly to five foot six - convinced the measuring thing was inaccurate!). I had expected to be around five foot seven!
Anyways - have gone from a BMI of around 25 (considered overweight!) to about 22 - without depriving myself of anything I like! Though I guess being teetotal for 7 weeks may have made a difference...
Anyway - this post is in danger of becoming rather long and geeky so will stop for now and begin the long, painful, arduous task of getting showered and dressed. There are days when I genuinely wonder if it is worth it but refuse to succumb to nightie and dressing gown all day!
Look forward to your comments on my amazing pics - I reckon my surgeon deserves a knighthood!
Linda xxx
Posted by Linda at 13:49